50 Common Java Errors and How to Avoid Them (Part 1) 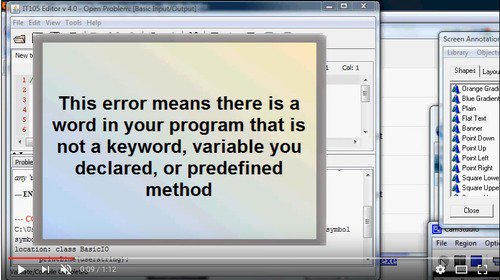 There are many types of errors that could be encountered while developing Java software, but most are avoidable. We’ve rounded up 50 of the most common Java software errors, complete with code examples and tutorials to help you work around common coding problems.

For more tips and tricks for coding better Java programs, download our Comprehensive Java Developer’s Guide, which is jam-packed with everything you need to up your Java game – from tools to the best websites and blogs, YouTube channels, Twitter influencers, LinkedIn groups, podcasts, must-attend events, and more.

If you’re working with .NET, you should also check out our guide to the 50 most common .NET software errors and how to avoid them. But if your current challenges are Java-related, read on to learn about the most common issues and their workarounds.

Compiler error messages are created when the Java software code is run through the compiler. It is important to remember that a compiler may throw many error messages for one error. So fix the first error and recompile. That could solve many problems.

This error occurs when something is missing from the code. Often this is created by a missing semicolon or closing parenthesis.

Often this error message does not pinpoint the exact location of the issue. To find it:

Check out an example of how a missed parenthesis can create an error (@StackOverflow).

The “unclosed string literal” error message is created when the string literal ends without quotation marks, and the message will appear on the same line as the error. (@DreamInCode) A literal is a source code of a value.

Commonly, this happens when:

3. “Illegal Start of an Expression”

There are numerous reasons why an “illegal start of an expression” error occurs. It ends up being one of the less-helpful error messages. Some developers say it’s caused by bad code.

Usually, expressions are created to produce a new value or assign a value to a variable. The compiler expects to find an expression and cannot find it because the syntax does not match expectations. (@StackOverflow) It is in these statements that the error can be found.

Browse discussions of how to troubleshoot the “illegal start of an expression” error. (@StackOverflow)

This is a very common issue because all identifiers in Java need to be declared before they are used. When the code is being compiled, the compiler does not understand what the identifier means.

There are many reasons you might receive the “cannot find symbol” message:

Read a thorough discussion of the “cannot find symbol” error and examples of code that create this issue. (@StackOverflow)

To fix this issue:

“Incompatible types” is an error in logic that occurs when an assignment statement tries to pair a variable with an expression of types. It often comes when the code tries to place a text string into an integer — or vice versa. This is not a Java syntax error. (@StackOverflow)

There really isn’t an easy fix when the compiler gives an “incompatible types” message:

Check out an example of how trying to assign a string to an integer created the “incompatible types.” (@StackOverflow)

This Java software error message means the return type of a method was not explicitly stated in the method signature.

There are a few ways to trigger the “invalid method declaration; return type required” error:

This Java software error message is one of the more helpful error messages. It explains how the method signature is calling the wrong parameters.

The method called is expecting certain arguments defined in the method’s declaration. Check the method declaration and call carefully to make sure they are compatible.

This discussion illustrates how a Java software error message identifies the incompatibility created by arguments in the method declaration and method call. (@StackOverflow)

The “missing return statement” message occurs when a method does not have a return statement. Each method that returns a value (a non-void type) must have a statement that literally returns that value so it can be called outside the method.

There are a couple reasons why a compiler throws the “missing return statement” message:

Check out an example of how to fix the “missing return statement” Java software error. (@StackOverflow)

“Possible loss of precision” occurs when more information is assigned to a variable than it can hold. If this happens, pieces will be thrown out. If this is fine, then the code needs to explicitly declare the variable as a new type. 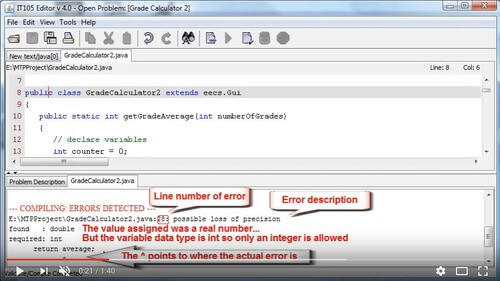 A “possible loss of precision” error commonly occurs when:

This explanation of Primitive Data Types in Java shows how the data is characterized. (@Oracle)

11. “Reached End of File While Parsing”

This error message usually occurs in Java when the program is missing the closing curly brace (“}”). Sometimes it can be quickly fixed by placing it at the end of the code.

The above code results in the following error:

Coding utilities and proper code indenting can make it easier to find these unbalanced braces.

This example shows how missing braces can create the “reached end of file while parsing” error message. (@StackOverflow)

“Unreachable statement” occurs when a statement is written in a place that prevents it from being executed. Usually, this is after a break or return statement.

Often simply moving the return statement will fix the error. Read the discussion of how to fix unreachable statement Java software error. (@StackOverflow)

This occurs when a local variable declared within a method has not been initialized. It can occur when a variable without an initial value is part of an if statement.

Read this discussion of how to avoid triggering the “variable <X> might not have been initialized” error. (@reddit)

This issue occurs when operators are used for types not in their definition.

This often happens when the Java code tries to use a type string in a calculation. To fix it, the string needs to be converted to an integer or float.

Read this example of how non-numeric types were causing a Java software error warning that an operator cannot be applied to a type. (@StackOverflow)

The “inconvertible types” error occurs when the Java code tries to perform an illegal conversion.

For example, booleans cannot be converted to an integer.

You’ll get the “missing return value” message when the return statement includes an incorrect type. For example, the following code:

Usually, there is a return statement that doesn’t return anything.

Read this discussion about how to avoid the “missing return value” Java software error message. (@coderanch)

17. “Cannot Return a Value From Method Whose Result Type Is Void”

This Java error occurs when a void method tries to return any value, such as in the following example:

Often this is fixed by changing to method signature to match the type in the return statement. In this case, instances of void can be changed to int:

Read this discussion about how to fix the “cannot return a value from method whose result type is void” error. (@StackOverflow)

18. “Non-Static Variable … Cannot Be Referenced From a Static Context”

This error occurs when the compiler tries to access non-static variables from a static method (@javinpaul):

To fix the “non-static variable … cannot be referenced from a static context” error, two things can be done:

Read this tutorial that explains what is the difference between static and non-static variables. (@sitesbay)

19. “Non-Static Method … Cannot Be Referenced From a Static Context”

This issue occurs when the Java code tries to call a non-static method in a non-static class. For example, the following code:

Would return this error:

You’ll get the “(array) <X> not initialized” message when an array has been declared but not initialized. Arrays are fixed in length so each array needs to be initialized with the desired length.

The following code is acceptable:

Read this discussion of how to initialize arrays in Java software. (@StackOverflow)

Now that we’ve covered compiler errors, next time we’ll dive into the variety of runtime exceptions that might crop up to ruin your day. Just like this segment, they will include code blocks, explanations, and pertinent links to help fix your code as fast as possible.