Angular vs React vs Vue: Stats about the battle of Javascript technologies 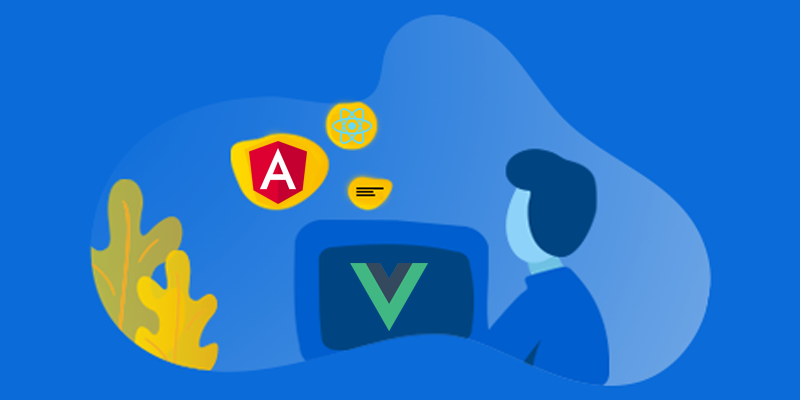 For several years, software engineers have been debating between Angular and React. Lately, this never ending battle has changed a bit with the release of Vue. Vue has surely increasing developers’ choice of application frameworks by one but also reignited the discussion on which one is more appropriate to use.

You probably already know that there no single answer. Each of them has their own benefits and drawbacks, and of course it depends on the project you are working on. Our scope here is to provide some stats about the 3 frameworks.

Angular (commonly referred to as “Angular 2+” or “Angular v2 and above“) is a TypeScript-based open-source web application framework led by the Angular Team at Google and by a community of individuals and corporations. Angular is a complete rewrite by the same team that built AngularJS.

React (also known as React.js or ReactJS) is a JavaScript library for building user interfaces. It is maintained by Facebook and a community of individual developers and companies.

Vue.js is an open-source JavaScript framework for building user interfaces and single-page applications. It was created by Evan You, and is now maintained by himself and the rest of the active core team members coming from various companies such as Netlify and Netguru.

Each framework has some unique characteristics that cause difficulties in mastering. For instance, if you seek to become proficient in Angular you should delve into its associated concepts, e.g. TypeScript and MVC. You will become masterful in Angular over time gaining also a valuable insight in the way the front end world works.

On the other hand, getting started with React seems easier by using the comprehensive official starters guide available. Developing on React often involves third-party libraries, making learning React framework a challenge, but it always depends on the features you would like to implement.

Vue is often considered the easiest to learn of them all, and it’s not so hard to transition from either Angular or React to Vue. However, what you gain from its simplicity maybe later spent in debugging and testing.

Here’s a short summary of Angular vs React vs Vue, in terms of their status and history:

The stats from the corresponding github repositories:

Although it is clear that React is most downloaded framework and vue the most loved one, it does not mean that that they are the best ones. As already mentioned, the decision which framework to use depends on many factors and varies from project to project.

Let’a also have a look at the npm downloads for the past 6 months:

It clearly shows React on top, followed by angular and finally Vue.

Let’s check also the Google trends regarding the terms users are searching more, in Greece and worldwide in the past 12 months:

Here are the most current job listings in LinkedIn in Greece and worldwide:

Observing the stats one can only assume that job offerings are almost the same in Angular and React, while Vue is almost 50% less. These results may steer you towards learning Angular or React, but keep in mind that Vue is gaining popularity and at some point the market will require more developers.

So, who is the winner between these three frameworks? You can’t really have one to cover all your needs. There are pros and cons in each one and you have to evaluate your project’s needs and requirements in order to decide which is best for you. Research will always help you make the right choice.